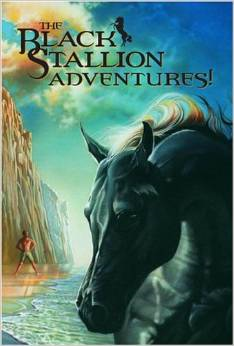 My grade school lacked a formal library. Instead, they had a make-shift library set up in the principal's office. It was a set of wooden shelves loaded with books. I don't think it was there when I was in earlier grades, but I definitely remember using it when I was in 6th grade. That's where I discovered "The Black Stallion" youth series by Walter Farley.
I had a passion about horses, but was destined to only read about them in books.

The Black Stallion story begins when a young boy, Alex, suffers a shipwreck along with a huge black horse. The pair survive, Alex holding onto the horses tail while he powerfully swam, eventually awakening on a deserted island beach. Eventually horse and boy become friends, are rescued and return to civilization.

Each story would climax in at least one horse race. I know they did a couple films based on the books, but I found them lack-luster. In a book, a horse race has a slower quality. I, the reader, could be right with Alex on The Black's back, feeling the mighty stallion straining against the reins, wanting to run full speed as Alex whispers in his ear to wait. When Alex crossed the finish line, I crossed the finish line. It was exhilarating! (I sound like Never Ending Story.)
On film, however, the Black Stallion's race was over in seconds. It just wasn't as fun.
Besides The Black Stallion, Walter Farley wrote a spin-off series about a red island stallion, including one where the red stallion and the black face-off against each other in a special race. I read those, too; I read every Walter Farley book the library held until there were no more to read.
I only read those books that one year in 6th grade, but remember them vividly and fondly to this day.

Thanks for stopping by!
My next post will be on April 7th for Good Eating Monday!
(I'm having a spring break!)

carol daniels said…
I think it is every child's dream to ride horses. We had an entire shelf on our bookcase dedicated to horse lovers. I think the only one I read was Black Beauty, and I loved it. We always had horses, so I rode them more than I read about them. Before my dad passed away, he gave me the entire collection of horse stories. Now I have no excuse to not read them!
Mar 20, 2014, 9:55:00 PM

kayerj said…
Oh my gosh! I loved reading the Black Stallion Books! I'm Carol's sister--I'll have to call her and see if she'll share that collection of books! Stopping by from mama kats kelley at the road goes ever ever on
Mar 21, 2014, 11:38:00 PM