- December 31, 2014
Have you ever seen wild Bald Eagle?
I hadn't---until Christmas Day. Then I saw my first!
We were driving back from a friends house in Fort Walton Beach when Hubby glimpsed something large in a pine tree near the road.
He wanted to see what it was, so did a turn around to go back for a look. I was astonished at what I saw in the tree--a bald eagle!
I didn't realize they were so huge. The bird book lists their body size as 30 to 42 inches--which is as big as a small child really.
Hubby parked and, since I had my camera with me, I got out and walked closer to catch some photos. My camera has a 40+ telephoto on it, so I didn't have to be terribly close.
It was a perfect clear day with a bright blue sky and the late afternoon sun was behind me, putting the eagle in a golden light.
I took several shots.
The best one is already on a wrapped canvas,  which features the eagle's head in sharp profile. You can go HERE to see it!

But I also have one to show you of him looking my direction: 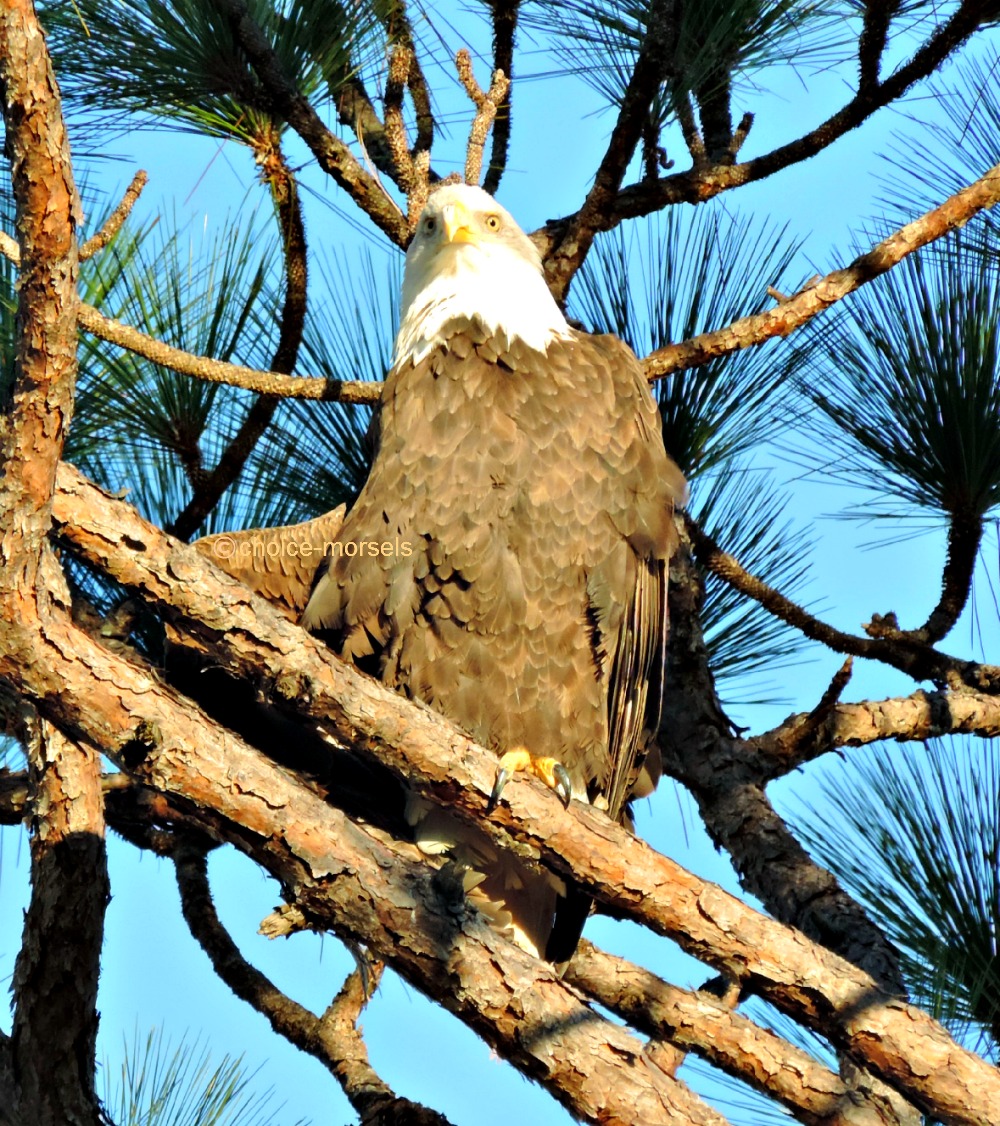 Is he not the most gorgeous thing you've ever seen?
****
Bald Eagles have been off the endangered species list since 2007 and Florida is home to a healthy population. They like to breed along rivers & coasts, making Florida ideal. Male & female look identical in coloring.
The near-by Air Force base owns about 700 acres of pine forest here on the Panhandle that also serves as a wildlife preserve plus there's the adjacent Black Water River State Park just north of that.
So that's a lot of deep acreage for eagles to live in unseen by human eyes!
Other birds of prey common to our region that I've seen around include Ospreys, Red-Tailed Hawks and Swallow-Tailed Kites.
*****
That's if for today!
We'll be going up to the Airmen Center on base this evening for snacks, fun & games, then near midnight will pray in the New Year!
#americanbaldeagles american bald eagles #gardenpicwednesday #wildbaldeagle wild bald eagle #baldeaglecanvaswrap bald eagle canvas wrap Garden Pic Wednesday