The Mama Kat Thursday prompt I chose today is to write a post inspired by the word "Camp."

Camping is what my family did when we traveled. Tent camping. 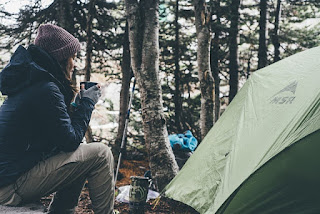 It was cheaper then a motel and certainly more interesting. We had some our most memorable family adventures camping. Then after I married, Hubby and I camped in tents for many years, mostly just for long trips. It wasn't anything he'd ever done before he met me, but he adjusted readily.

Turns out there's some unexpected rules that come with tent camping:

1)  Evolution Comes With Experience:
Hubby and I started out with just a pup-tent, but there was no way to stand up inside it. So, we evolved to a pop-up dome tent, but the  air mattress took up the whole floor, so when it started leaking, we got a more traditional square tent for actual standing space.
(Ever tried putting pants on laying down?)
Sleeping on the ground in that first pup-tent was uncomfortable, so we evolved to queen size air mattresses that could be blown up by a pump we could plug into the car's cigarette lighter spot! Ah, the comfort!
My parents evolved from a large canvas tent to a simpler pop-up tent trailer with fold-out sections that had actual mattresses, plus it was handy just parked out in the yard for guest sleeping.

2) You Will Always Forget Something.
I remember the year my family went camping and we packed everything---except a can opener.
(Walmart didn't exist yet.) 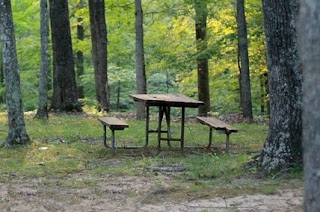 3)  You Won't Always Be Comfortable.
I remember as kids, we camped at a State Park by a lake on one trip and though it was summer, it was still so unexpectedly chilly during the night because the lake made the night air cold, none of us slept well.

Another time I went camping with my college friends in the late fall in Indiana, when it was about the end of October and the tent was an old style National Guard type square canvas tent with no floor. I had a sheet of plastic under my sleeping bag, but that was it. I lay awake most of the night, shivering.

Another thing: a tent's ability to repel rainwater eventually fails. If not the whole tent, at least along the seams and when it rains, it rains inside the tent----something I've had happen many, many times.

4)  Never Spray Mosquito Sprays Inside A Tent
Mosquitoes get in the tent and zing around your ears and you'll be tempted to spray that can of mosquito repellent---DON'T DO IT!
The insect spray chemicals will melt the your tent's water-proofing!
We made that mistake as a family one time camping in a local Indiana State Park and, as a result, a downpour rained right through our canvas tents skin. Literally, flooded us out and we ended up sitting in the car, drawing pictures on the steamy windows.
(You can read about that in detail here.)

5)  Your Stuff is Vulnerble When Camping
Among campers, there's normally a kind of etiquette of respect and most of the time you're safe going off and leaving your tent for the day. People kind of look out for each other.
But, there are always bad apples.
Fortunately, in all my years camping with my family and with Hubby, I've only experienced 2 incidents of having stuff stolen:
*Once when my family was camping at a park in the vicinity of Kings Island in Ohio, we came back from our day at the park to find someone had stolen my Dad's vintage Coleman Lantern.

* And once while Hubby and I were camping in Virginia near Norfolk, someone went in our tent and stole a pillow and our cooler that did have food in it.

That you can lock an RV is probably their one significant advantage, but if you're tenting it, just be aware and do your best to secure anything you want to hold onto in your car.
So, we wise and don't leave suitcases, purses, coolers or anything you want to keep in a tent while you're away.
****

That's my list of camping rules from my many years of camping.
| Do you have any?

KatBouska said…
These are such good tips! We camp in tents, but I would love to do some trailer camping for a little added comfort. You're not kidding about the cold nights. I never have enough blankets and shivering throughout the night is awful. I'll make sure to leave the mosquito repellent out of the tent though. Good to know!
Aug 19, 2018, 11:48:00 PM