- July 02, 2019
Today's recipe is from a box of Mueller's Thin Spaghetti for:
Skillet Beef Lo Mein.
The picture on the box looked appealing and the recipe seemed easy, so I decided to give it a whirl.
It was really good and a fantastic way to stretch one sirloin steak into several meals!
d I think it could've used 2 cloves.
For the veggies, I ended up using half a fresh onion, sliced and half a package of frozen mixed color Bell Peppers instead of the stir-fry mix, since I already had the frozen peppers on hand. I also used instant bouillon vs canned broth and fresh minced garlic.
(Photo is my own and looks nearly exactly like the picture on the box.)
Here's the recipe from the Mueller's box: 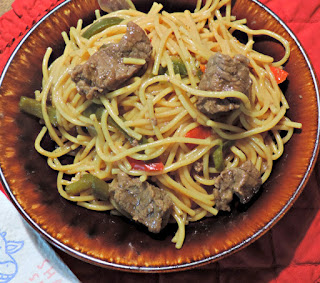 Directions:
Heat oil in skillet over med-high heat. Add beef and cook until brown on all sides, then remove beef from skillet.

Break uncooked pasta into 2-inch pieces and add to skillet for 2 minutes, stirring constantly. (This allows the pasta to absorb all the juices in the pan.)

Now add broth, garlic powder, the pepper stir-fry veggies, Teriyaki sauce and the cooked beef pieces. Stir to blend. Bring to a boil, then reduce heat to a simmer and cover. Simmer for 25 minutes, stirring every 5 to 10 minutes to avoid sticking.
Lo Mein is done when all the liquid is fully absorbed.
******
If I this again made again, I'd like use more Teriyaki and more garlic and less broth. I'd mix Teriyaki sauce with a little water to make up the liquid equivalent of the second can of broth.