The Mama Kat prompt I'm doing today I'm shortening to a "video I recently enjoyed," since I really don't watch many videos.
I more then enjoyed this video, I laughed till I cried.  It's hilarious!

Hubby watches Dry Bar Comedy vids, which specialized in  clean comedy and he showed me this one with Jose Sarduy (sar-dooy), who is an Air Force Academy grad and currently is an Air Force Lt. Colonel pilot in the Reserves, who also just happens to be a fantastic comedic story-teller.
Since we're both veteran Air Force, Hubby and I get the Air Force Academy. We get room inspections.  I suppose some might not know that much about military academies--just think of them as college on steroids. Imagine combining the toughest science and engineering college with all the worst aspects of any military Basic Training multiplied by 5 and you've got the picture of military academy.

In this video, Jose recalls his "worst" Air Force Academy Inspection. You might like to enlarge it to full screen.
(It's from youtube, so there will be momentary ads)

KatBouska said…
Oh my gosh, I would so be that mom calling to make sure my kid is ok in an entirely different geographic location. lol That was hilarious!
Nov 18, 2020, 9:42:00 PM 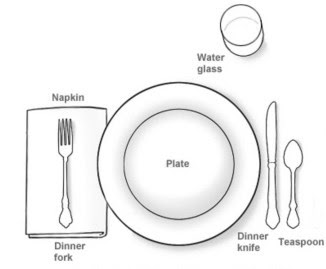 Not so long ago I observed an Air Force kid helping set tables for a large group eating event and saw he didn't seem to know to place the fork on the left side. Instead, he group the fork, knife and spoon together on the right. I suppose, with families eating at home less, teaching the kids table good table setting etiquette is may sometimes be getting over-looked.  With that bring the case, I decided today's Good Eating post would be how to set a dinner table properly! Because a properly set table is the first step to enjoying a meal! Which table setting method you use depends on the occasion and what's being served, though I'll cover basic, semi-formal and formal American table settings. You might wonder how these table settings, particularly the formal ones, came to be? Well, they largely come from the days of multi-course meals that were served by butlers and servants, where utensils were arranged in order of use and could be removed easily as each course
Read more 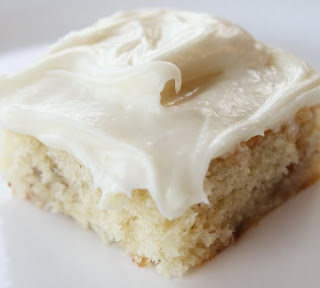 Today's Good Eating recipe is one great for using up those bananas that got ripe too fast: Frosted Banana Bars! I don't know about you, but I have stages for bananas:  Stage 1: slightly green to just barely ripe and no spotting on peel: eat plain. Stage 2: more ripe, but not squishy with only a slight amount of spotting on peel: slice on cereal or use in gelatin. Stage 3: squishy ripe and heavily spotted peel: use in baking muffins, quick breads or something.  Now Hubby will eat a Stage 2 banana plain. I won't. But nobody in my house eats Stage 3! This recipe calls for a jelly roll pan, which is either a 10 x 15 or 12 x 17 size baking pan with a 1" high side wall.  I have a couple I use for baking cookies on. They make good cookie sheets, too, so not a waste to have on hand. This is a pass-along recipe given to me by my friend, Paula, who said these bars were popular whenever she took them to a pot-luck. A good picture of what Banana Bars look l
Read more