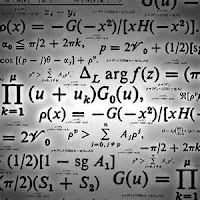 I actually had two 6th grade teachers who split teaching various subjects: Mrs. Daglish and Mr. Denny, who was also the principle.

Now Mr. Denny taught the math segment and he was at war with the "New Math."
It was 1968. I attended a rural elementary school where 1st first through 6th grade were still being housed in the same building. (No junior high back then.) There was just one 6th grade class in one room consisting of about 35 students and we stayed in that room together all day except for recess.

In those days, mathematics were taught by a method called "The New Math."
I'd learned how to do long division using this New Math method in 5th grade, which looked something like the example to the left. In chart-like fashion, the answers were arranged down the right side of the problem rather then along the top and any fractional remainder was just called "the remainder" rather then a decimal amount. (R = remainder.)
I was doing well with this method in 5th grade and getting all straight A's in math.

Then I progressed to 6th grade where Mr. Denny taught the math segment.
Now Mr. Denny didn't happen to agree with the New Math method and refused to use it. He insisted we do long division the "old math way," where you put answers at the top of the problem, above the division bracket, as exampled by this chart to the left, and remainders are expressed with a decimal point.

Having all the math I'd been taught to that point just suddenly tossed in the bucket was really confusing. My math success plummeted. I went from straight A's to barely making a C and never really recovered. If I remember right, I think Mr. Denny made me attend a summer school prior to 7th grade to better my math.
Even so, my math grades remained barely passable for the remainder of my high school career.
I was a causality of Mr. Denny's little math war.

The good news is, in 10th grade, when neither math nor P.E. was further required, I had the great satisfaction of being on the honor roll every semester till I graduated.
Then, much later, after a term in military service, I went to college and got really good grades throughout my various required math courses---just so you know there was a happy ending!

(Note: the New Math method of that era was used from 1952 to 1975. I also use the "old math" style to do long division to this day; the new math format long forgotten.)

Jerralea said…
Funny how sixth grade seems a blur to me ...

Evidently I must be a year or two older than you because we never did long division the new math way. We did it like your second example and that is how I do it until this day.

Jessica said…
Like you I also had 2 teachers. One taught english and writing and the other was our main teacher did the rest of the subjects. They said they did that to prepare us for middle school.

Donetta Sifford said…
I was born in '76 so attended kindergarten through 12th from 1981 to 1994. The 'new math' method confused me just now looking over your chart. Math has never been a strong suit of mine, but I use the number over top of the bar, subtracting on down the line. lol. My oldest daughter began 6th grade this year. I can help her with anything but math. They have her already doing Algebra. Thank goodness, she seems to pick up on math. I'm glad your story had a happy ending though after all. I'm planning on attending college this coming spring and dread the math refresher courses that I'm positive they'll have me take. :) Great post!
Aug 24, 2013, 1:19:00 AM

KatBouska said…
Wow I've never seen that "new math" style before. We were only taught the long division in the old math style. That would be insanely difficult to try to switch between the two when you had been taught one way. Math is already so confusing to me, I think my grades would have plummeted too!
Aug 24, 2013, 11:16:00 PM

Dyanne @ I Want Backsies said…
I was a child of the "new math" era, too. And I am proof that it was a BIG FAIL. I didn't learn how to divide properly until I was in college and took Math for Elementary Teachers. I only had to have 2 units of Math in high school. Got them (Algebra I and II) with barely passing grades and never set my big toe in another math class until college. And my kids are both good at math and were doing Algebra-type problems as early as 3rd grade. Huh.
Aug 25, 2013, 6:29:00 PM