- May 05, 2016
The Mama Kat prompt I'm doing today answers the question, "When was the moment you realized you were grown-up?" 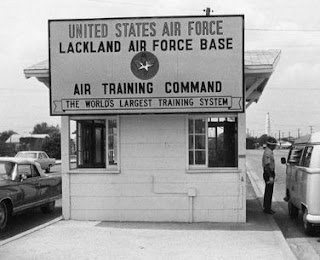 It was 1975. Vietnam had only been over a couple years and anyone in the military was held in low-regard  in the public-eye. Even so, I joined the Air Force and left for boot camp in October of that year.
My Dad drove me to the military enlistment center to Indianapolis on his way to work, hugged and kissed me good-bye outside and I went inside. After that I was on my own.
I don't remember thinking about being grown-up at the time. I just remember feeling fairly nervous, but if I have to pick a defining moment for being grown-up, I would say being completely on my own at that point was it.
After being sworn in, the recruiter herded myself & a couple other recruits to the airport for our flight to San Antonio, Texas.
After that, there was no going back.

I have fine and happy memories of Basic Training. We were still treated as "ladies" back then, because it was still a social norm to treat women courteously simply because they were women. I remember a big gruff male instructor loudly yelling and cussing at the boys to get on their bus, but to us girls, he gracefully bowed and ushered us toward our own bus with a gentle," Ladies."
I had two female training instructors the whole time. They never once cussed at us. They might've raised their tone here or there if needed, but they were never rude.
I remember laughing a lot in Basic. I even remember our instructors even laughing with us once or twice. We wrote our own cadence songs to sing while we were marching. We shared each others cookies and treats that came in the mail and, believe it or not, we even had a class on how to wear make-up!
I was expected to leave there an Air Force professional, able both to be respectful and treat others respectfully.
And I did.
***
(Because of a comment, let me amend my story by further pointing out I grew up in the era of single-income families where mostly just Dad's worked. We lived 44 miles away from Indianapolis and it was a 88 mile round trip commute for my Dad 5 days a week. The enlistment center was downtown and his job location was  more to the north side. So we left early in the morning, and he dropped me off on his way to work. He couldn't stay, though I'm quite sure he wished he could have. I was at the MEPS for several hours; the flight wasn't until around 2 pm and it was totally okay with me for Daddy to go ahead to work. I understood. I was sad to say "goodbye," but I went bravely into the MEPS because I knew this was my first steps into a big adventure and I was ready.)
****
When was your moment?

Thanks for Visiting!
#1975basic training #mamakatthursday #whenIwasagrownup 1975 basic training mama kat thursday when I was a grown up

Unknown said…
Your dad just dropped you off and drove away?!?! Oh that makes me want to cry!!! Although I guess when it comes down to it, that's basically what they did to all of us, in a way...

Hopewell said…
I just found you thru Between the Lines. I love your memory--partially because I grew up about the same distance from Indy in the same time period. I have an acquaintance who was also one of the "ladies" of the USAF in those years, too. I will definitely be back for more of you blog! I'm glad you participated in Between the Lines, too. Lisa of http://hopewellslibraryoflife.wordpress.com
May 10, 2016, 9:04:00 AM