- August 16, 2012
Last week one of the Mama Kat Prompts was to describe "a meal you dreaded as a kid growing up" ---but I couldn't do that one, because there was nothing put on our table growing up that I ever dreaded.

The prompt this week is the opposite:
Describe a favorite meal when growing up.

Since we lived too far out in the country for natural gas lines,  our gas stove and water heater ran on propane. Two 5 foot size silver tanks stood outside adjacent to the back porch under the kitchen window. To save gas usage, if our Mother was cooking something in the oven for supper, then she'd try and cook as much as the meal as possible in the oven at the same time.

So my two favorite oven meals were chicken and meatloaf.
The chicken menu involved: a fryer hand-cut up by Mother, then rolled in flour, baked in pieces in a 13x10 pan and baked potatoes. Very often a baked dessert was included, such as either bread pudding or pudding cake. Plus there was usually either a fresh or home-canned veggie from the garden, depending on the time of year heated on the stove-top. 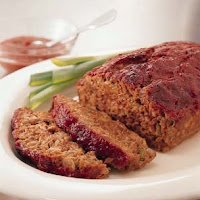 The meat-loaf menu involved steamed rice and, because the meat-loaf was baking in the oven, it was another occasion for one of above mentioned baked desserts.
Plus the usual garden veggie .

What I loved about the rice as we ate it with sugar and canned Milnot. Delicious. And Milnot, if you've never add any, is tastier then Carnation evaporated milk because it's evaporated skim milk mixed 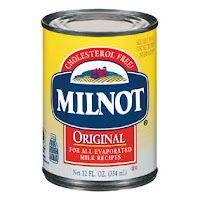 That's how my Dad liked his rice, being a northerner from Minnesota. He also liked eating slices of tomatoes sprinkled with sugar. It's a northern thing.
Anyway, those were my favorite two meals.
By the way, "Pudding Cake," is also sometimes known as "Hot Fudge Cake,"because it forms it's own fudgy sauce-like pudding under the cake while baking, though the difference is Pudding Cake has instant coffee added to give it a rich mocha flavor!
I don't know if the recipes are identical, however, since mine calls for a teaspoon of instant coffee, which gives that sauce a rich mocha flavor!
*********