Showing posts from September, 2013
Show all

Greetings!  I'm back from my brief holiday road trip with my 2 sisters and mother.  I flew to Indiana, then from there we drove to southern Minnesota and stayed in Albert Lea. I haven't flown for 20 years and things have changed--a lot! Printing my own boarding passes was a novelty. Also I didn't know the proper dress for the security inspection: on the flight up, I wore a jacket and a scarf, which both had to come off. For the flight back, I dressed smarter in stuff I didn't need to take off. lol. One of the highlights of the trip was visiting the SPAM museum in Austin, Minnesota, which is Hormel headquarters. I didn't realize how popular SPAM was. It's even celebrated in Hawaii with a yearly festival. SPAM surged in popularity worldwide as a result of WW 2, since it was shipped everywhere a easily stored & long-last convenience food was needed from soldier to hungry allies. Tons of recipes at their website! Also in Austin we sample "looses meat&
Post a Comment
Read more 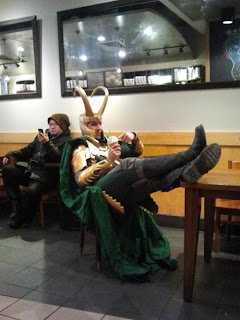 First trivia question:  Have you ever dressed up in a character costume to attend a comic or other type convention? I have. Once. It was my dream to attend a Star Trek Con and in 1989, I got my chance. I was a part of a Star Trek Club at the time and wore an Original Series costume to the convention. (Command gold shirt with black pants and boots.) This dressing up thing is called "Cosplay" (costume play) and I find pictures of what people have accomplished fascinating. According to a friend of ours who is goes to many conventions, there's good prize money to be had for the costume contests. Here's some Pinterest picture finds of some amazing Cosplay examples:  A Loki cosplayer taking a coffee break in a very good look-alike costume: Some people do animation charactors: Here's a good one of Astrid from "How to train Your Dragon": Some people have a strong enough facial resemblance to the characters they wish to portray t
Post a Comment
Read more

The Mama Kat Topic for today is: "Something I Wanted To Be When I Grew Up."   Since I was a child of the 60's and 70's, there were fewer career options for women. My Barbie doll was always either a teacher, secretary or nurse, which were about it for the day, though I was never interested in any of those professions. Like other kids looking at dinosaur pictures, I think first wanted to be an archaeologist. Discovering huge bones sounded like fun---until I learned how tedious, intricate and mundane the job really was.   After that, I toyed briefly with the notion of being a Veterinarian, even trying the 4-H Veterinary Medicine segment one year, but it was too much science on round worms and trichinosis to hold my interest. Then, when I was a teenager in the early 70's, a show called "Emergency" started up featuring a pair of fireman-paramedics. Paramedic medicine was brand new and trendy then. I was completely enamored with the idea
1 comment
Read more 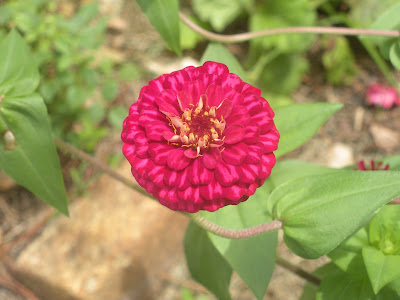 This week I've been working on taking-in a couple shirts I'd ordered a couple months ago. I decided I'd rather adjust them myself with my sewing machine, then dealing with all the hassle of going through the return process.  They're classed as "big" shirts---emphasis on big . Apparently ordering my normal size for a regular shirt translates to super big in a "big" shirt. Mental note: order medium next time. I saw a Monarch visiting my various Zinnias today. It's hard to catch those with wings open flat. I only got a profile. If you want a butterfly garden, Zinnias are a good choice. I also have lots of Long Tailed Skippers visiting and even caught a nice shot of a Pearly Gray Hairstreak butterfly, which is a very small grayish-blue butterfly.   Today's Garden Pic is of a pink Zinnia that took on this pretty variegated pattern as a result of all the rain this summer. The initial blooms were all plain pink. These variegated
Post a Comment
Read more 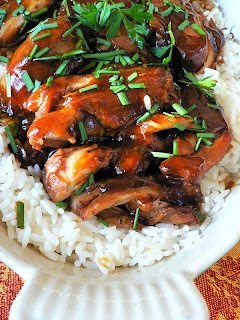 Welcome to a new week in September! Good news: I was able to finish my back patio drainage project today. Also planted a new miniature rose, a red one, in the front bed. Todays Good Eating recipe is one I tried from my "Food Ideas" board in Pinterest for Slow-Cooker Teriyaki Chicken. I liked it enough to make again, though I'd reduce the recipe. It calls for 12 boneless chicken thighs (2 packs), which would be great for a family of 4 to 6, but I'm just feeding 2 of us, so it made way too many leftovers. Next time, I'll reduce it to just one pack of thighs. I also snipped green onions into mine, though they're not mentioned in the ingredients; just pictured. And I thickened the juice right in the slow-cooker rather then moving it around: I removed the meat, mixed in the cornstarch and turned the cooker on high for 20-30 min. Ingredients : 12 boneless chicken thighs (about 3 lbs) 3/4 cup brown sugar 3/4 cup low-salt soy s
Post a Comment
Read more 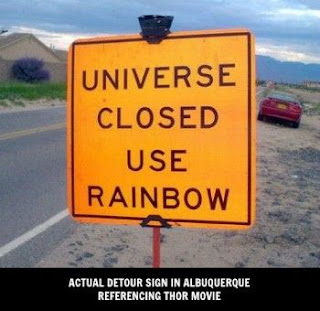 I like finding things that make me chuckle on Pinterest. Here's some amusing finds: An actual sign in New Mexico making witty reference to the first Thor film:       This next one is self-explanatory:       And last, a clever reference to Back To The Future  about traveling back in time to get free tacos. LOL.   Come back Monday for to see what's up for Good Eating!
Post a Comment
Read more 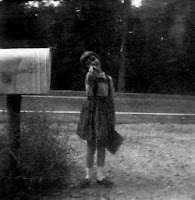 Me, 1963 The Mama Kat Prompt topic for today is "First Day of School." You have to set the way-back machine for 1963: my first day of school. My Dad captured the moment in black and white.  I remember I was embarrassed to have a camera aimed at me, that's why I was pointing. In 1963 only dresses were worn to school. If it was cold, you could wear pants under your skirt, but you had to take them off once you arrived at school. My Mom made this outfit, as she sewed the majority our clothes. (And  made clothes for our Barbies, I might add.) I wore a short hair cut with bangs until I got to high school and could take of my hair myself. That was generally the rule on hair, though I seem to recall a few home-perms happening along the way.  Oddly, my naturally wavy hair lays quite straight when cut short. We lived way out in the country along a state road surrounded pretty much by trees. There were no neighborhood kids to play with. Being the oldest, I
2 comments
Read more
More posts