- December 26, 2012
Goooood morning and welcome back!  Almost a new year!
Last full moon of 2012 will be this Friday!
Did you have a good Christmas?
The yahoo poll on that same question today was highest for Christmas being "as expected."
I specifically asked for a fuzzy feeling new bathrobe, which my husband got for me and he needed a new belt. He also likes ankle socks---the kind that have a low rise of ribbing that go up the ankle 1 1/2 to 2 inches. And he prefers colors, but that's a challenge in that type of sock. Being a class of sport sock, they tend to be either black or white. Joe Boxer does make a set of red/blue/gray ones, but the color on them disappears inside the shoe, since the ankle ribbing on all 3 is plain black. However, I was lucky to encounter a different brand that had a visible stripe of color in actual ribbing. It was a set of 3, each with a different color stripe in the black or gray ribbing. He was quite pleased.
As for the garden---well, we had a light freeze the weekend before Christmas. It got whatever was susceptible in the front yard, such as the potted Saliva and Vinca's. Everything along the south side of the house, where the sidewalk to the door is, was sheltered and Vinca's there, untouched. The Saliva in the ground in the back, which are against the west wall of the house, also were untouched.
Tomatoes, of course, were all fried.
My broccoli, green oregano, miniature roses, mums, rubeckia and dusty miller all remain indifferent to the cold & frost.
I harvested 5 heads of broccoli yesterday! Some of it will be going into the ham casserole I'm making tonight for sure!
Since another freeze is predicted tomorrow, I snipped nearly every branch off the one red coleus that survived the first freeze and added them to my table arrangement of Christmas greenery.
So that table arrangement is today's garden pic of the week: 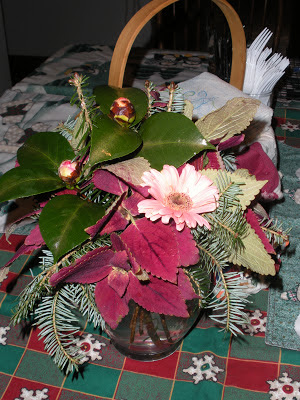 It's composed of Frazer fir greenery from my Christmas tree I snipped, my pink Gerber, which has been in this vase since I cut it around Dec 14th, red coleus, and 2 branches of pink Camilla buds.
The trick to keeping a vase of blooms long-lasting is:
Changing the water every 2 or 3 days, washing the vase out and re-snipping a bit off the stems at an angle, then replacing everything in fresh, warm tap water.
It's the bacteria that builds up in the water from living stems and greenery that kills bouquets, so cleaning it out regular is the secret.
Still, cut flowers will die eventually. That's a given.
So that was my Christmas table arrangement!
Oh, and I heard a bit of juicy gossip about the flower shop I used to work at! We ran into the current delivery driver lady at the commissary this past weekend and she informed me one of the floral designers I used to work with was now fired---again!  She'd been fired before.
Though a very good floral designer, this particular designer is a strongly opinionated woman, who had owned her own floral shop at one time, so she was always quibbling with every manager we ever had about everything: how they stocked the store, how many hours we worked, whether we got fair bonuses, etc.
She also was very good at talking everyone else into a state of outrage over anything, a rabble-rouser.
That's not a good combo for a business, but in the flower arranging world, a good designer is hard to find and, being British, she was the only designer there who had been to an actual floral training school. The rest of us just learned the trade on-the-job.
Plus she knew the business, having owned her own shop, so managers just put up with it.
Anyway, since the Mama Kat Prompt this week is "Share a Holiday Recipe," I'll just be using Monday's Pumpkin Cake link---so Thursday this week will be a "Bananas Thursday," where anything goes!
So come back tomorrow to find out what I decide to do!
#gardenpicwednesday caring for fresh arrangement christmas table arrangements coleus floral designer stories fresh arrangement care gardening