- September 21, 2017
For Mama Kat today, I thought I'd journey down memory lane reminiscing about favorite candy from my childhood in the 60's and 70's. 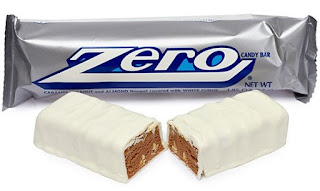 The Zero Bar
Whenever I see a Zero Bar, the first thing I remember is eating them at the public pool in Martinsville, Indiana. The snack bar there sold them and Mother splurged to buy us all one after swimming.
Zero bars area combo of peanut & almond nougat coated in white chocolate fudge. It has remained in production since then, though ownership of the brand has transitioned many times. It's currently produced by Hershey, Inc and are still on store shelves here and there. 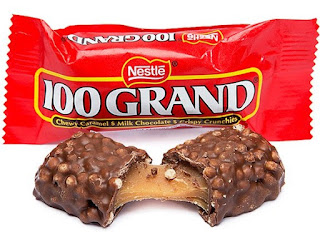 This classic bar (pronounced "hundred thousand dollar bar) is a fond memory. It was a caramel filled bar with a coating of crispies and milk chocolate. Originally introduced in 1966 by Nestle, it was on the store candy shelves until the mid-80's.
We had a local gas & grocery store with a cafe just a few miles from our house at  cross-roads called, "Wilbur."  Our Dad liked to buy his Colby cheese from the Deli there and he'd take us with him. I remember getting a 100 Grand Bar there as a treat.
Nestle still makes the bar, however, and they be purchased from a variety of vintage candy purveyors online. 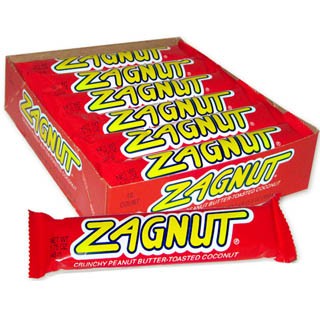 Now this vintage bar is one I remember as a kid on grocery store candy shelves. It was introduced by the Clark Candy Company in the 1930's composed of peanut brittle with cocoa and toasted coconut. It was a crunchy coconut bar. Hershey makes it now and it can still be purchased via a vintage candy seller online.
I recall the bar and, since I like coconut, it's likely I had one or two. 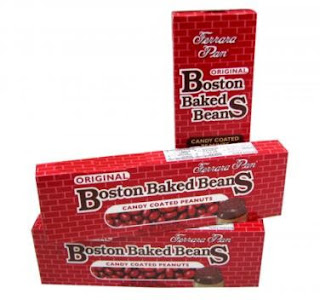 Ever eat these? I've seen these at my local Dollar Tree store, which actually
sells a lot of vintage candy. I recall Boston Baked Beans showing up in my Halloween treat bag fairly often. They're candy coated peanuts that look like "baked beans."  (And peanuts are legumes!) Remarkably, this candy is made by an independent American candy manufacturer called, "Ferrara Candy."
They also make all Brachs candies, too, since merging with Brach in 2007.

I recall particularly loving these! (I thought they were nougat filled with a couple whole almonds on top under the milk chocolate  in the 60's? Does anyone remember?)
Unfortunately, the U.S. version of the bar was discontinued some years ago.
But good news---Ethel M Chocolates, a gourmet chocolate subsidiary of Mars, Inc., has, just this month, Sept 2017, relaunched the "original American recipe" Mars bar for sale in their stores and on Amazon!
****
What classic candy do you remember from your youth?

John Holton said…
I, on the other hand, have had all of these, and they're all great. Brach's and Ferrara Pan were both based in the Chicago area. Ferrara Pan is in Forest Park, Illinois and make all kinds of candies, including Lemonheads, Atomic Fireballs, and Red Hots. Brach's made all kinds of great candies, both chocolate and other. The company that owns them also owns what used to be Heide (Jujyfruits and Jujubes) and they also make Chuckles. In short, they fueled my childhood and my second childhood.