- September 07, 2017
Today's Mama Kat prompt this weeks said,
"Did you Garden this year? Share  the fruits of your labor."

It's been a terrible year for gardening. Far too wet.
Despite that, one Bell pepper in my veggie bed managed to survive and not just survive, it thrived.
We were out of town for two weeks recently and when we came back---ta-da, it was loaded with green peppers!
Not a bit of labor went into it aside from planting it.
That's the beauty of peppers. 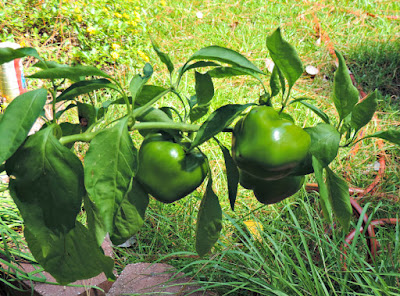 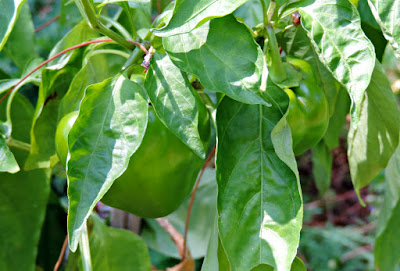 On Another Note...
Today was the first Thursday of the month lunch out for my Yoga fitness class. Six of us went today, all of us between the ages of 50 and 75.
Two of the ladies are retired nurses and I used to be a Air Force medic, so we started trading amusing medical stories, particularly about baby births. There's always funny stories about baby deliveries. Our Yoga instructor talked about her second child being a full-breech and that she elected to have him by Cesarean.
I told her there's a joke about that she could say about her son that goes like this:
"I had my son by Cesarean. He's normal, except he prefers to go out the window rather then the front door."
They cracked up. They'd never heard that joke before.
#bellpeppers #cesareanjoke #laborlessfruits #mamakatthursday bell peppers laborless fruits mamakatthursday