- February 09, 2018
I was actually busy Wednesday, so I didn't get around to doing a Garden Pic post, so I decided to show off the first blooms of my Daffodils today!
It means, for Northwest Florida, winter is generally over.
I ordered some veggies seeds to day from a company called Seed Savers, which is devoted to saving the diversity of our worlds flower and vegetable seeds, because varieties are gradually becoming homogenized by big farming.
Many of their seeds have fascinating origins; some donated by families who've owned and grown them for generations!

I ordered a bush zucchini, bush green beans & a drought resistant kind of spinach. I plan on buying tomato plants locally.
I'll want to get going on the veggie garden around mid-March.
Today, I planted the potted Hyacinth bulbs I'd purchased a couple week ago into their permanent location outside and used my weeding tool to dig up numerous Spider Worts that are where I don't want them. They're pretty, but intrusive. 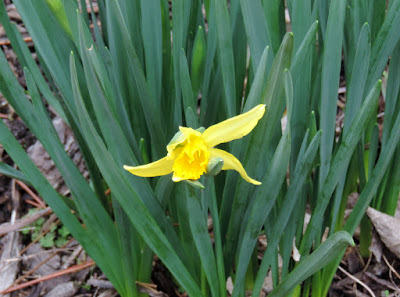