It's mid-January and weather has been mild here for a couple weeks, which is making lots of stuff outside think it's time to bloom. The pine trees are flowering two weeks early, so everything is coated with yellow pollen! (That's where baby pine cones come from.)
My Sea Holly is shooting up future flowering stems.
My two Bell Pepper plants, which are in the strawberry bed right outside the front door, have wintered over and are sprouting all sorts of new growth and blooms!

So a shot of the happy new growth on one of my pepper plants is today's Garden Pic of the Day: 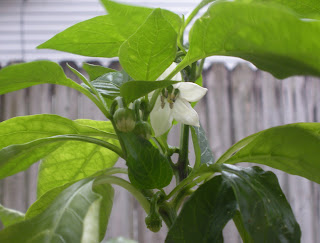 This will save me having to buy any new ones. I say: if it ain't broke, why fix it?

I was out today doing a little pre-spring yard work, like adding a bag of soil to my north side Hosta bed while the Hosta's are dormant to raise the bed level a little. I was also weeding out excess Spider Plants from around behind the A/C unit and from under my Japanese Privets.
Normally all the Spider Plants die back from freeze, but not this year. They make a hearty sort of under-shrub filler--but just a little control.
Anyway, I'd stashed by yard trash bag I'd been using yesterday behind the Azalea bush next to the garage. There's a large sheltered space between it and the house and when I lifted it out today, I noticed this dark, odd-shaped "rock" in the sand, so I reached down to pick it up, but, when I touched it, it moved. I realized it was a toad. Not just any toad, but the really large one (3 inches) that occupies our front garden, whom I often find perched in my pots. It'd stumbled upon his hibernation spot, where only his back was showing in the sand he was nestled deeply in.
When I checked back a little later, I'd found he'd dug himself backwards into the sand, leaving only his nose and eyes still exposed.
So I caught a shot: 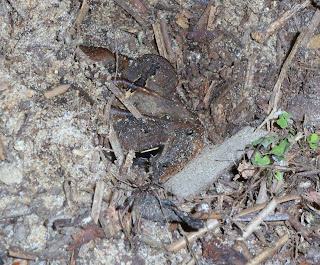 I guess he wasn't quite ready to get out of bed yet!
#gardenpicwednesday bell peppers southern toad