In my case, I'm going with a figurative headache.
The first thing that comes to mind as as a headache-giver is all the customers back when I used to work at a flower shop.
I was a floral designer, which means I made the arrangements.
I also answered the phone and dealt with customers directly over the counter---then the headaches would start.

I don't believe that old adage about "the customer always been right."  In fact, I frequently found flower buyers to have really over the top expectations far exceeding reality.

At this particular shop, we designers were all part-time and all worked different days. Only the manager worked Monday through Friday and never on Saturdays if she could help it. The rest of rotated Saturdays.
Invariably, Saturday was the favorite customer day for calling about an a billing issues or a complaints, neither of which I, simple designer, could necessarily could do much with. I was really just there to do the orders.

One Saturday in particular burns in my memory: a lady called, weeping on the phone about the floral rosary our shop had made and had sent to her father's funeral the day before.
It was made using red roses, as in this picture. 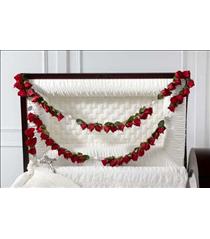 She was weeping because we hadn't sent "a proper" rosary. "It's not made right," she insisted and I distinctly remember her prattling on about the number of decas it was supposed to have and didn't. Apparently she'd expected the flower rosary to be an exact representation of an actual rosary, which it isn't meant to be. It's only a symbolic decoration.
She basically accused us of having sent her father into eternity without a proper rosary.
I didn't know what to say.
I didn't know what sort of rosary had been sent.
Under a previous manager, who'd been too cheap to buy the rosary kit that was a breeze to pop rose heads into, we had to hand-make the things, wiring the rose heads together by hand.
But that manager was long gone and I didn't know where the current manager stood on the matter. They weren't ordered much, so I had no idea whether a kit type had been sent or a hand-made one.
I also had never seen a rosary kit, so I didn't even know what one ought to look like.
I was really stuck for an explanation
I could only apologize as best I could, but she didn't want her money back or anything. She just wanted us  "to know" how terrible it was that she hadn't been able to bury her father with a correct rosary, then, still weeping, hung up.

I left a note for the manager, but didn't find out until I came into work later the following week that the floral rosary sent to the funeral was, indeed, the kit type and had been done exactly as the directions dictated.
However, I doubt any explanation would've soothed that lady.
She just expected what she expected.
She ought to have been told when she ordered it that it wasn't an actual rosary.
Ever after that, whenever I heard a floral rosary mentioned, I'd always say, "And be sure to tell them it's symbolic, not literal."