- May 13, 2013
Welcome back to another gorgeous week of May! The cool weather is lasting a long time this year! 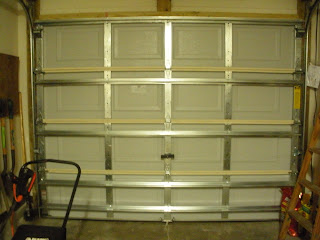 And, here's a interior view of the new garage door! Treated wood forms the frame, which is bolted at top and bottom into the frame of the house. It's designed to withstand intense wind, but really, we just needed a door that would stay shut securely. The old one had a tendency to randomly pop open about 5 inches, so I was having to keep it tied with a rope to prevent that. That is a biggest reason for getting a new door!
I liked the installers, too. Very proficient and very knowledge. He explained to me exactly how to care for both the hinges and outside appearance, which is a briefing we didn't get on the last one!

Anyway today's Good Eating recipe is for Sweet-Sour Slaw!
This is a vinegar based slaw recipe given to me by a Jewish lady I met in swim aerobics at the Y, who enjoys sharing her family recipes.
It's actually a terrific tasting slaw with extra touches like oregano, which is great for me, since I grow tons of oregano!
I'm going to give you the easy version she suggested that starts a bagged slaw mix you can buy that has both colors of cabbage and carrots rather then having to start from scratch.
After having tried it a couple times, I've determined the dressing quantity is enough for 2 bags of slaw mix, so that's what I'm going to suggest.
I happened to use a Sweet Vadalia onion in my last batch of slaw and that was really delicious! And I prefer to use English Cuks.
Ingredients
2 Bags Slaw Mix
1 green bell pepper
2 Kirby cucumbers (unwaxed pickling cucumbers) or 1 English Cucumber (usually come wrapped in plastic and are less seedy.)
1 medium onion, any type.


Dressing:
1/4 cup water
1/2 cup olive or canola oil.
3/4 cup apple cider vinegar
1/3 cup to 1/2 cup sugar or Splenda. (I prefer using 1/2 cup!)
1 tsp sea salt
1 tsp oregano (start with 1/2 tsp, then increase oregano to taste.)
Directions:
All the veggies are to be shredded, grated or sliced super thin and fine.
Green pepper: slice into very thin strips, then mince.
Cucumber: peel outer skin, then grate on largest hole side of box grater or slice side for paper thin slices.
Onion: Grate on largest hole side of box grater.
Combine bagged slaw, minced peppers & grated cucumber & onion in large bowl and toss together until well combined.
Make dressing, pour over slaw and toss together. Chill, then toss again before serving, since dressing accumulates heavily to bottom.
Note: the original directions suggested making this slaw the night before or, if not overnight, at least 6 - 8 hours in advance of serving.
You can do that, but I notice the dressing gets juicier the longer it sits, so I prefer to chill it for less time, maybe an hour or two before serving.
For a shorter chill time, stronger seasoning with oregano might be appropriate.
********
I don't have a food processor, but if you do, you could use that on your peppers, cucumbers & onions instead of grating by hand.
The main thing is the make all 3 very fine and thin.
********
Eat up, me hearties, yo-ho!