- August 14, 2013
Butterflies are an fascinating, amazing creatures that transform magically from a lowly caterpillar into a glorious butterfly.
It reminds me of Psalm 139:15 where it says "my frame was not hidden from Thee when I was made in secret..."
For, indeed, butterflies are made in secret.
I posted pictures of the green striped Black Swallowtail caterpillars in my parsley a couple weeks ago. A few days later, they were ready for the next stage and each set off to seek a hidden, secure location. Of the 3 in my parsley pot, one got away without my seeing where it went, but the other two I directed to the leafy shrub by my A/C unit.
Interestingly, both chose to secure themselves on small branches on the outer-most edge of the shrub, where I could see them easily.
I believe that was deliberate on their part, so as butterflies it would be easy for them to dry their wings and fly away.
I did notice that about the caterpillars---their methodology appeared both urgent and calculated.
After securing themselves to a branch, overnight they changed form, becoming a green case, then 9 days later, butterflies emerged.
I marked my calendar, and as the birthing day approached, checked often.
The first appeared Friday morning. A girl. Though, by 9:45 am when I ran outside for a first check, she was pretty much done drying and ready to leave.
The other caterpillar was a day behind the first and due the next day, so I got up earlier to look on Saturday morning. The first couple checks, nothing. Then third check, a butterfly was hanging there. A boy.
I made a collage of pictures to show: from caterpillar to butterfly, though the first 2 pics were the female and the actual butterfly pic is the male.

Notice the line of yellow dots on the black body: this is an identifier for a Black Swallowtail. (The dark form female Tiger Swallowtail looks extremely similar to a female Black Swallowtail in wing coloration, though it's body is striped in yellow & black.)

How can you tell gender, you ask?
By the topside wing colors actually. Folded, like this, it's hard to tell. Open and you can tell easily.
A male has tons of bright yellow spots on black with barely discernible blue markings. The yellow spots make him flashy & dapper looking when flying around. A female is larger in size and her completely nearly completely black except for blue coloring on the bottom end of her wings and a smattering of barely discernible yellowish spotting, if any.
As it turned out, I thought the 3rd caterpillar that disappeared from the pot ought to be popping out about the same time and, if I was lucky, I might see it's black form hanging somewhere. Well, I was very lucky--lucky enough to walk around the corner in time to see a black butterfly with still wilted wings crawling out from some Hot Poker greenery (about 15 ft from the parsley on the patio!)
Here she is below, fresh out! Yep, another girl! 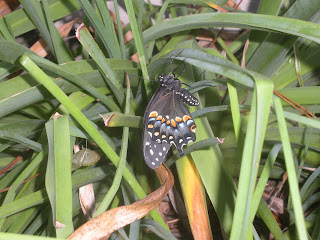 They hang upside down like this, pulsing their wings every so often. It takes around 90 minutes for them to become flight ready.
Then, just before they're ready to fly, they spread their wings flat open for several minutes, then---launch into the sky!
It was a extraordinary photo opportunity, as Swallowtails visiting flowers flit a lot and drink with their wings mostly closed or rapidly pulsing. Seldom flat & still. But newly hatched is a different story!
I was able to get gorgeous shots of both the male and female with wings flat open.
This is the real reason I was so interested in keeping track of them--photos!
I'll be using the best of those shots on my 2014 Critter Calender!
#gardenpicwednesday Black Swallowtail butterfly pics Garden Pic Wednesday