- November 30, 2016
Do you know anything about Rose Hips?  I'd herd the name, but didn't know that much about them until I looked up.
Rose hips are the fruit of the rose the appears after the rose is spent. Roses are actually members of the crab-apple family, so their fruit is basically like a very small, slightly tart crab apple.
They are also called Rose Haws. To get them, you have to leave your roses untrimmed and let them "go to seed."

This is a photo a my own climbing rose on it's trellis, thick with hips. The bright orange are ripe, I think. 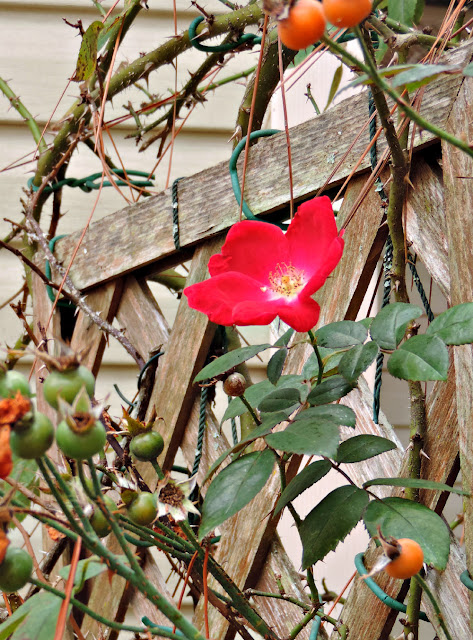 Yes, they are edible---but not the seeds within. Those should be removed. Slice open, removed the seeds, rinse and prepare as desired. Rose hips can be used for teas, sauces, jelly, seasoning & tea---fresh or dried.
Any rose hips can be used, but there is a certain kind of rose called Rose Rugusa, which makes very large size hips that are easier to work with.
Rose hips are valued for their high Vitamin C.
Cooking in aluminium destroys that vitamin C, but any other kind of pan is fine.
Best time to harvest rose hips is after first frost, since this is supposed to "sweeten" their flavor.

Rose Hip Tea:
You'll need 4 to 8 fresh rose hips (with seeds removed) in a cup of boiling water for about 10-15 minutes.
If you're using dried rose hips, use less because dried fruit is more potent.

Links for things to do with Rose Hips from About Home:
Rose Hip Jelly
Rose Hip Crumble Pie

****
But if you don't want to bother with tiny fruit, birds like them and rose hips make a great food source for your winter bird friends, so just leave them for the birds.

Broccoli Photo Update:
Just a current shot of my broccoli as it looks now. Big bushy and making heads. 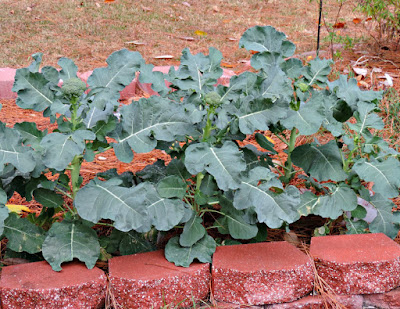 It's finally raining today, too!
****
Stop back for a funny story for Mama Kat tomorrow!