- February 14, 2018
Today was moving day for my Agapanthus--The container it's been occupying for years has gotten over-crowded. 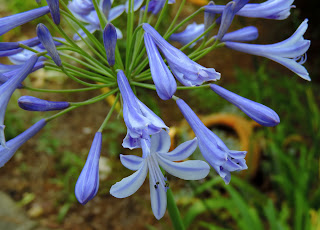 They are a true-blue perennial  flower, also called "Lily of the Nile," common in Southern landscaping. It's actually related to the Amaryllis family.
The name "Agapanthus" means "Love Flower" in Greek.
(This photo of one of mine in bloom)


Presently, they were just starting to pop out green leaves in this container below: 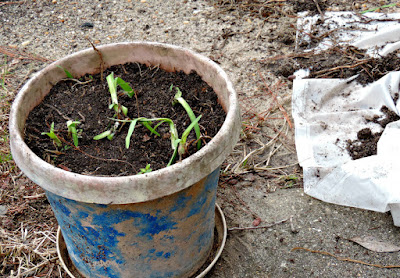 I used an old shower curtain to dump the container out on, so I could separate the rhizomes. A couple bulb-based weeds had gotten in among them and this was a chance to get rid of those as well.

Once I separated the rhizomes and replanted this container with a few, I put all the remaining rhizomes in a bucket and carried them to the rain garden area in the back yard.
Along the outer edge of the flagstones edging this rain garden, I've had orange Native Day Lilies for several years, but they've become too invasive to manage easily anymore.
With the lilies also just starting to come up, it was the perfect time to move things around, since I could see where they were!
The ground back there was still pretty mucky from a recent rain, which made digging them up much easier. The lilies came up in thick rooty mats 6 to 12 inches wide plus a number of root clumps for single lily heads.
(You can see the pile of lilies in the lower left corner of photo below.)

The Agapanthus spreads as well, but very slowly and not intrusively.  Hopefully, I'll eventually have a nice row of blue heads along the this rain garden edge come summer! If not this year, then next!
I replanted the day lilies in several places out front and along the outer edge of the back bed as well as did general raking out and clean-up of the rain garden.
The whole job took 2 1/2 hours. 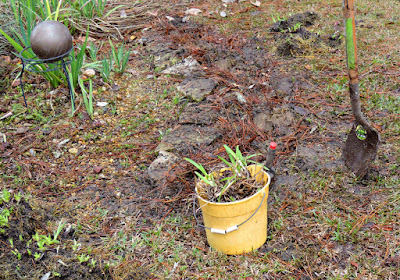