Garden Pic of the Day: Rainy

- August 08, 2012
I missed my window of opportunity to mow. It was sunny, but I was diddling about on the computer. I saw it was starting to look cloudy, so I went out---and wouldn't you know it---thunder and sprinkles.
I did stay out a bit edging some beds, planted a couple of fresh squash seeds, trimmed a bit of skirt the 1 pampas was developing and dead-head a couple hibiscus. My window may return later in---I could see bright clouds and a sunny blue sky to the north, beyond the storm cloud. Or it could remain stormy and gray. On the Gulf coast it's a feast or famine thing.

As promised, the Garden Pics of the Day are two front flower bed shots in the rain:
First up, a shot of the our parking slot. That tall, leafy plant in front of the Pampas grass is the bi-color Hibiscus.
Interestingly, it's actually illegal to park vehicle on the street you see in the back ground.
Though, of course, everyone parks extra vehicles on it all the time and it is a dead-end street, so no traffic.
However, if your car parked on the street is fender-bendered by someone else, you'll get the ticket for being illegally parked, not them for hitting your car.
I know that because a lady who lives a couple houses down backed out of her driveway without seeing this truck parked on the street across the road and--wham--really put a dent in his truck with her SUV. The Sheriff's came till the State Police arrived and took over, then they gave the dude with the truck the ticket for illegal parking, which meant his insurance was going to have to pony-up. The neighbor lady got off Scott-free. 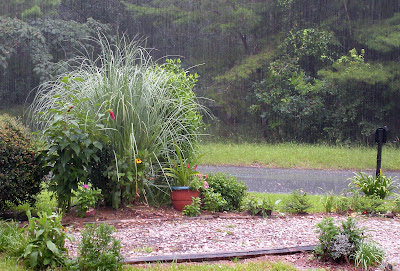 The next pic is of the corner bed on the opposite side. You can see the large pot with the blue ceramic cat sitting in it. That huge, round bush is the Gardenia that is next on my trim list. Those tufts of grassy leaves in the foreground are my prolific Siberian Iris. My rock circle with the miniature roses in on the other side of those.
You can see my car parked in the yard. That's where we put it on Sunday's so all the singles who come to our house for Bible Study can park off the street! Of course, it's back in the drive-way right now.
(About 9 people weekly average and a couple do car-pool.) 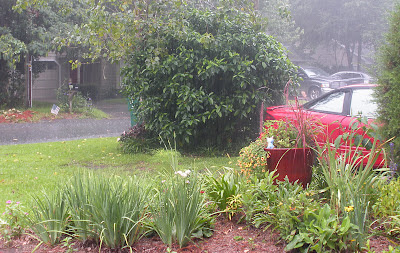