- August 23, 2012
The Mama Kat Prompt I've selected today actually was a question about "what do your kids have that you wished to have when you were a kid," but since I don't have children, I've decided to change that into:
"What sort of wishes did I wish as a kid that came true?
Actually,  a number of things.

#1) What I wished for then: a pine tree outside that I could decorate for Christmas.
I grew up in Indiana where pine trees aren't native and apparently don't take easily either. Though, I did get a baby Blue Spruce at a flower show I attended as a kid that did grow, but it was only 6 inches tall when I got it, so you can imagine how many years that took! And I didn't really plant it in the right place for that sort of use. I remember my father had a round flower bed between the garage and the trail down to the mailbox---I wish now I'd had planted it there. 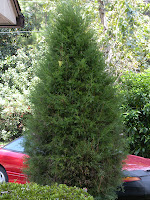 What I have now:
A cedar tree my own front yard I keep relatively Christmas tree shaped for decorating--though it's getting a little tall.
Since Florida is also not conducive to spruces or firs.

#2)  What I wished for: to be a Floral Designer.
﻿
﻿﻿I took Flowers in 4-H and the 3rd year requirement was to do a flower arrangement using home grown flowers. I did a front
triangle shape and won championship at the county level that sent me to the State Fair, where I had to re-make an identical arrangement in front of judges.
What happened later: I actually did end up being a Floral Designer for 17 years.

It was an opportunity that just fell open to me in my late 30's after I happened to take a adult evening course in fresh flower arranging at the local college. A local flower shop was looking for someone to train into the position of designer, if they'd go through that training without pay, and the instructor of the college course felt I had the skill to qualify. So I went over to the shop, accepted the terms, spent several weeks training, passed a speed test, then was hired.
(One must be able to do a full table arrangement in 15 minutes or less in flower designing. Speed is essential.)
#3) What I wished for:  a job using my artistic ability:
Initially I got an A.S in Graphic Art after I completed my Air Force service, but I quickly discovered I hated the job. It's dull, sweat-shop, repetitive work without much margin for advancement, unless you can get into a very large ad-agency, and, worst of all, you have to put up with making your art the way other people want.
I really hated that. I didn't have it in me to master the neutrality of feeling this requires.
Also---no personal computers then, so it was obnoxiously tedious work that involved precise cutting of special film to separate colors  and dark-room photography to produce single graphic design.

What I got later:
Last year I quit the flower shop job and this year I opened my own on-line Zazzle Store, which allows me to design as I like on my computer, then easily upload the design.

Jamie Miles said…
That was a great journey through your journey of finding it is what you want to do in this life. All the best in using your creativity as a career.
Aug 23, 2012, 10:16:00 PM