Hubby and I enjoy playing online multi-player adventure games as a free-time hobby. Young military guys he knows envy he's so lucky to have a wife who enjoy's that sort of thing.
We used to play Pirates of the Caribbean for several years before it was closed down and currently we're playing Star Wars: The Old Republic.
Star Wars is actually more interesting then Pirates of the Caribbean. In Pirates of the Caribbean, you could only be a Pirate and there was a single set of quests everyone did.
In Star Wars, there are 8 different character categories: you can be a Jedi, a Smuggler, a Commando, a Sith, an Imperial Spy, etc and each character category has it's own unique story line and quest missions. So that means tons of quest options!
You also choose whether to work the Republic or the Empire.
Of course, first time out I choose Jedi Knight. Who doesn't want to be a Jedi Knight?
(See the screenshot of our characters together above.)But what I found most intriguing is the character conversations. Your character has to talk to a various people along the course of their mission and you're generally offered a choice of 3, which can range from wise-crack to honorable to mean. These verbal choices have an ethical quality that does effect the texture of the story-line and also effect your characters  "Light" or "Dark" side scale. You can literally turn a Republic character to the Dark Side or an Empire character to the Light just by which answers you choose.

In the course of the Jedi story-line, my Jedi character was told that she, "had a touch of the dark side to her."
This revelation was part of the scripted story-line, but it gave me an great idea, since I wanted to created a new Empire character, but didn't really want them to be evil.
Having a bit of made-up story for a character in my head helps guid my conversation choices in the game, so I thought, since my Jedi has a secret bit of Dark Side to her, what if she had a half-sister she didn't know about, raised in the Empire? Some accidental half-sister, who has a secret bit of Light in her, who has also inherited the same strength in the Force and naturally finds service as a Sith Warrior?
So, with that in mind, I created T'Saan, to look very similar to my Jedi, Shi-loh. Same red hair, same green eyes and I'm doing my best to choose the most honorable verbal responses I can for her that will raise her "Light" scale higher and higher.
So T'Saan ends up having a quality of mercy & compassion that she must keep hidden from her Sith employer.
(Screenshots of the two below) 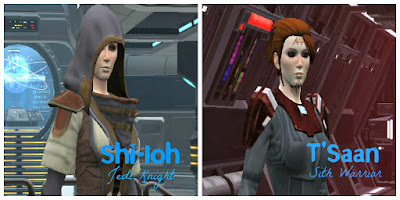 Likewise, Hubby has created a new Empire character, so we can play together and help each other with each other's missions. He's an Empire Spy, a witty guy with a jaunty, carefree attitude that's resistant to being mastered by any of his Empire employers. Hubby, too, is playing his character to the "Light Side."
So, our goal is to see exactly how far we can push our characters to the Light Side and how that will effect the story line.
So there you have it. One thing we do with our free time.
******
Update: T'Saan has recently added a Jedi Padawan to her crew and together they are both secretly walking according to the Light, committed trying to "reform the Empire" from the inside, so things are going along quite successfully. Let me note that the Padawan joining the Sith Warriors crew is part of the game story, but whether the Padawan does so on the Light side or the Dark depends on the players choices.
*****
So, what sort of hobbies do you have?
****

Thanks For Visiting!
(Note: Free Players in Star Wars the Old Republic do not have all the privileges that a paying player does. There are a few minor restrictions.)
#favoritefreetimeplay #mamakatthursday #onlinegames favorite free time play mama kat thursday online games

May said…
I am ambidextrous- which leads to this whole lack of brain side dominance- which leads to completely spastic use of a computer mouse, joy stick or any handheld controller. So, I can only imagine what being good at a game like this might be like!
Nov 13, 2016, 5:31:00 PM