- November 24, 2016
Today I thought I'd revisit childhood memories of Thanksgiving, particularly the menu. 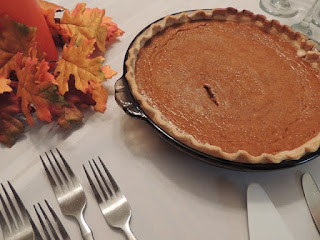 Our dining room table was made from a door. It was a smooth wood door with a shiny, dark-brown varnished surface. Our Dad was something of a hobby-carpenter and he put it together. So it made an economic and roomy table.
Our two tall glass oil lamps were the annual centerpieces. Later, my middle sister found a flat piece of worn driftwood down at the creek that she wanted to turn into a centerpiece. It was some kind of hardwood, so weathered it was nearly black in color. Sister cleaned it up, Dad drilled 3 holes in it to hold candles and it joined the two lamps at the center of the table yearly after that for every holiday meal.
Our parents were from Minnesota, so our Thanksgiving menu naturally had a northern bent. No pecan pie. No cornbread stuffing. Certainly not.
We always had Turkey and sage stuffing. I recall Mother saved bread ends and buns in the freezer for making the stuffing with, so it was a mix of white & wheat bread. Generally, it was baked separate from the the Turkey in a 9 x 13 pan. I've tried for years to make stuffing as good as hers, but have just never mastered it. Funny thing, she says the same thing, that her dressing never came out as good as her Mom's.

Also on the yearly menu was real mashed Russet potatoes. We never had sweet potatoes, though I think I remember one of my sisters making that sweet potato casserole with the marshmallows on top once. You know, with canned sweet potatoes. 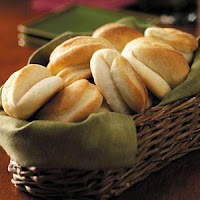 Homemade Parker House yeast rolls were a meal tradition. The first time Hubby had Thanksgiving with my family, he took one look at the those folded-looking rolls and said, "What are these? Lips?"
From that day forward, "Lips," became their official family code name for Parker House rolls.

Canned jellied cranberry sauce was a standard. To me, it just isn't Thanksgiving without it.

Pumpkin Pie, was, of course, a yearly Thanksgiving staple. Christmas, too. Home-made with an old-fashioned lard crust. Pumpkin so good it made a delightful breakfast cold, the next day.
Sometimes she would make Mock Mincemeat Pie or Tarts as well, depending on whether there had been enough green tomatoes to can any. (Mock Mincemeat is a combination of cooked green tomatoes & raisins rich with spices like cinnamon, ground cloves & allspice.)

Yup, lots of fond memories of Thanksgiving!
It was President Abraham Lincoln who established Thanksgiving as a Federal Holiday in 1863 to, "Give thanksgiving and praise to our beneficent Father who dwelleth in the Heavens."
So, as we all enjoy our fabulous feasts, let us not forget to say "Thank You!"
*****
See you for Good Eating Monday!
#mamakatthursday #thanksgivingmemories #thanksgivingpast mama kat thursday Thanksgiving Memories Thanksgiving Past

John Holton said…
Velveeta helps you forget you're eating cauliflower or broccoli, huh? XD I was never much of a Velveeta fan, although I remember my grandparents used it all the time. That might be the reason...
Nov 25, 2016, 1:09:00 PM