- November 17, 2016
The Mama Kat blog writing prompt for today is to write something inspired by the word, "Rust."
In a conversation about cast iron skillets, the topic of "rust" seems to always come up. Mostly how to avoid it.
This past Sunday, one of the young men who attends our Sunday leadership team Bible study, named Randy, asked me how to go about "seasoning" cast iron skillets.
We've known Randy several years, ever since he was in the Air Force. He's been working for Walmart now, for several years since getting out, and what prompted his question is he saw a 3-set of cast iron skillets on sale for $20, which seemed a good deal, and if he got them, how to go about seasoning them? 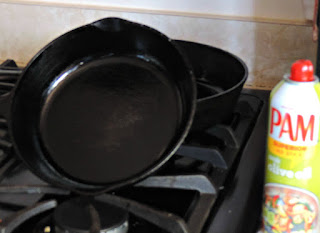 To show him what he wanted to end up with, I showed him one of my skillets: (pictured)
"This sheen you see," I explained to him, "is what you want to achieve."
Of course, 2 of my skillets are 34 years old and one not included in this photo used to be my Mother's, making it even older.

I then explained the basics of seasoning an iron skillet:
"Iron is porous," I said, "So we have to use salt to fill those pores. Plus continued use, keeps those pores sealed.
I gave him my general guidelines for how I season my pans on the stove top:
#1)  Pour a good, thick layer of salt over bottom of pan.

#2)  Saute the salt over med-high heat using a metal spatula for 3 or 4 minutes. Be sure to use spatula to rub salt up sides a little.

#3) Rinse salt out of skillet.

#4)  Dry skillet by putting it back on heat until all moisture evaporates. Or you can wipe it dry with a paper towel.

#5) Add a teaspoon or two of Olive oil to skillet and, using a paper towel, rub it all over inside of pan. (I'd generally recommend repeating with an olive oil treatment after cleaning several times on a brand new iron pan.)

Then I explained the cleaning rules:
NEVER  WASH A CAST IRON SKILLET WITH DISH SOAP!
If you do, you'll have to season it all over again.
You can wash the outside with dish soap, but be careful not to get it on the inside.

To clean an iron pan:
#1) Just scrub it under running hot water.
#2)  Dry it either by wiping with paper towel or over heat till moisture evaporates.
#3)  Finally spray generously with an oil cooking spray, like PAM or apply a light coating of Olive Oil.

Since Randy is buying a nesting set of pans, I pointed out how I store mine on the stovetop:
"Once they're seasoned & oil, you can't nest them anymore, " I told him, then pointed out mine, which are stacked in reverse order from the smallest to the largest on one side of the stove top, ready for use, since I do use mine all the time. (photo)
Some people store pans inside the oven, on the racks, but I always forget them there, so I don't.
(You can't store them oiled in inside cabinets either because dust falls on the oil and sticks---or other unpleasant things.) 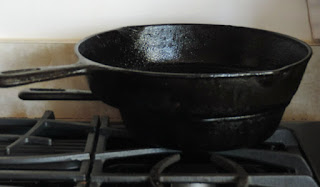 This is when the topic of rust came up from someone else listening to the conversation.
An iron pan, left untended and unused long enough, can loose it's seasoning and rust. Using a cast iron skillet is part of what keeps the seasoning working, so  the best way to prevent rust is by cooking in it regularly.
Good news, though. Cast iron with rust can be cured. If you find a pretty rusty cast iron at a yard sale, a good scrub with a steel wool pad might be in order prior to re-seasoning and it might merit a couple of seasonings to get it going again.
For a tiny bit of rust, the salt will scrub it up.

Finally, I assured Randy that iron skillets were a good investment because they cook better and brown and crisp things better.
I think healthier, too.
****
So, what's your rust story?

May said…
I love this post. I knew about seasoning and have done it faithfully. But I didn't realize the salt was about sealing pores. Also, I think mine may have seen some dish soap so I better get to seasoning again.
Nov 19, 2016, 9:55:00 AM