For me, elementary school was 1st through 6th grade held in building in the middle of farm fields. It was rural Indiana. It was also the 1960's. There were no television in the classrooms. (Computers smaller then the size of a room didn't exist yet.) 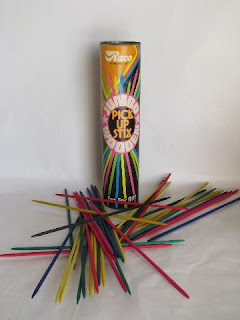 So on days when it wasn't nice enough to play outside, we had to play games inside, so I remember games so old-fashioned, I wonder if modern kids have ever played them!

I recall in 3rd grade playing "Upset the Fruit Basket."
For this game, the teacher stopped at each desk, whispered a name of a fruit to each student, then one student stood by the teacher, the odd-man out, their desk unavailable for use, all waiting in eager readiness for their fruit to be called.
Indoors, the game worked very much like musical chairs.
After a potent pause, the teacher would suddenly call "grapes" and all the "grape" people would spring from their desks, trying to get to another desk-seat. This was the odd-student-out's opportunity to seize a seat, too--and whoever didn't end up in a desk-seat got to stand up by the teacher to wait the next round.
If the teacher called, "upset the fruit basket!" everyone spilled out of their seats all at once to grab a new seat and not be left out.

I recall in 5th grade we had some ready-made games, such as "Pick Up Sticks" or "Barrel of Monkeys."
Pick Up Stix, pictured above was my favorite!You just poured the
You just poured the stix out of the can onto the floor, then players take turns trying to pick them up without disturbing the pile. If the stix fall apart, the game is over. The person with the most sticks wins. 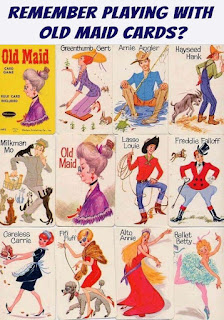 I do recall playing Old Maid.
In 3rd grade having a delightfully illustrated deck available, such as this one pictured, as pictured, and certainly no one wanted to end up with the Old Maid in their hands!

Then in my final year in elementary, in 6th grade, we had two teachers. Mrs. Dauglish and Mr. Denny, who was also the Principle. They split the day, sharing the teaching job.
The indoor game Mr. Denny let us play on rainy days was called "Eraser Tag."
For this game a student is chosen and they their name written on the blackboard. They they, in turn, write a name of another student on the board. That student comes forth, then both grab an eraser, balance it on top of their heads, then take off at a fast walk to do a complete circuit around the classroom and be the first to arrive back at the board and win by erasing their name. The eraser must not fall.That was an automatic lose if it did.
The loser then chose another students name to write on the board for a new round.
I never was picked to play, but I really enjoyed watching the boys hurry around the room. They were very competitive. I recall one boy actually threw his eraser at the other boy who was beating him and, at that point, Mr. Denny called an end to the game for that day.

There was one notable group game we girls often played outside at recess called, "Colored Eggs."
This involved one girl in charge of the game the job of giving the rest of the participants who were the "eggs" a color. Then all the "eggs" would stand against the school wall, while one girl would be the "Wolf" and stand to oneside, prepared to chase the fleeing "egg." When a egg color was called, that "egg" would run and the Wolf would give chase and try and tag them. It was basically a form of tag. If the "egg" got tagged, they then became the "Wolf" for the next round. 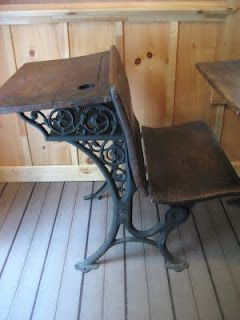 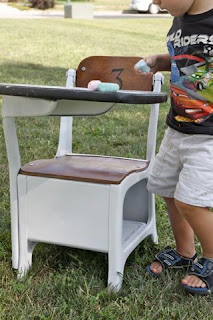 I wanted to include a picture of the sort of desks we sat in from 1st through 4th grade back in that era. They were iron with wood seating and desks with an ink-well. Part of my elementary school had been built in the early 20th century, so I'm sure that's where they came from.
Then when the additional wing of classrooms was built in the 50's, they spread them throughout the new classrooms along with a mix of new seating that was a single metal chair with a wood seat & desk top, like the second picture.
By the time I reached 5th and 6th grade, we finally had modern metal desks with acrylic tops and individual chairs for everyone.
****
So, that's some things I remember from my elementary school experience.
(photos are from Pinterest)

Thanks for Visiting!
(That z in Dayz is on purpose, by the way.)
#elementaryschoolmemoirs #mamakatthursday #schooldayz Elementary school memoirs mama kat thursday School Dayz

Unknown said…
Lovely! Our desks were exactly like the second pic. There was a HUGE area for recess, and horses on all three sides. Of course we were country kids, so playing next to horses and cattle was the norm for us! Made-up games are just the best, because they forge bonds that span decades! My Elementary School is still there, but it's been remodeled so many times I'm sure I couldn't find a thing. They probably don't even have the coat closets (open at both ends) where nearly everyone snuck their first kiss - LOL!
Sep 14, 2017, 7:31:00 PM

KatBouska said…
So fun the things teachers come up with to keep kids entertained and learning! We played the pick up stix game AND old maid too!
Sep 19, 2017, 12:06:00 AM