- July 09, 2019
We had plumbing work done today.
I needed a new kitchen faucet we'd purchased put in, the values under the sink fixed (apparently they leaked when Hubby tried turning them off a couple weeks ago) and the master bathroom sink handle, which was straight, but 90 degrees opposite of straight, straightened.
Clearing out the cabinets in both, then putting everything back has taken all afternoon. It necessitates cleaning along the way and I put shelf liner in the bathroom sink cabinet before putting it's stuff back.
Hubby just called that he was stuck on base. A thunderstorm lightning strike triggered security alarms and the Air Base shut down the gate, stopping traffic from departing base. Right a rush-hour, too. That means a major back-up.
He was in his car in a parking lot where he could see the line of traffic, waiting for it to start moving, so he knew the gate was open again.
So, busy day.

Today's Good Eating recipe is home-made Beef Pot Roast Hash
Chuck roast makes the best pot roast. I seared a chuck roast on all sides in a skillet to brown and seal in the juices, then in a slow-cooker added a packet of Lipton onion soup mix, a chopped clove of garlic, a dozen pearl onions and 1 3/4 cups of water. I stirred the liquid to combine it, then added the meat, put on the lid and set it to cooking on Low.
At 1pm, I added several gold potatoes, cut in half, enough to form a ring around the pot roast. Then put the lid back on and left it to cook until about 5:30 pm.
It was the most tender and delicious pot roast. Mouth-watering.
We ate some of the beef that night, another 1/3 for barbecue beef sandwiches the next day and finally for hash.
Beef pot roast hash is my favorite thing. I serve it, like my Mother did when we were kids, with an egg on top.
After cooking the pot roast, you'll want to conserve 1 cup of leftover broth.
The ingredients for Beef Pot Roast Hash is all the leftovers: the potatoes, carrots, onions, and beef. 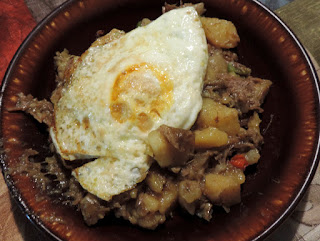 Directions:
In skillet over medium heat, add olive oil followed by all the cut up left overs. Stir to combine and stir enough to keep from sticking.
Use spatula to break potatoes and carrots into smaller pieces as needed. You may also shred the beef smaller with two forks, if you like.
Season with salt and pepper as desired.

Stir cornstarch into broth to dissolve, then over hash in skillet and stir to combine it with hash as it thickens. (It also helps prevent the hash from sticking to the pan.)
Once hash is hot & done, turn off heat and cover while you fry up the eggs in another skillet, one per person.

To serve: add hash to bowl or plate and top with egg.
******
I didn't cook any carrots with my pot roast this time, so I substituted 1 cup of frozen red & green Bell Pepper strips, which works great.
A bowl of pot roast beef hash with an egg always gives me warm memories of my childhood plus it is super tasty and very filling.
#beefpotroasthash #beefrecipes #goodeatingtuesday Beef Pot Roast Hash Beef Recipes good eating tuesday