My best, most dramatic boat experience happened in 1978 when I was in the Air Force and assigned to Karamursel Air Base in Turkey.
It was custom to be assigned a "sponsor" from the future location, who would meet me and show me around. I was a medic and she was an Airmen at the clinic I'd be working at. 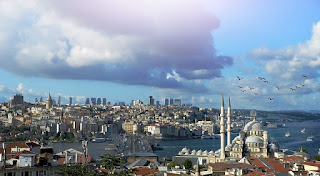 So I flew into Istanbul. It was near lunchtime and I'd been awake over 24 hours.
My sponsor met me along with two friends she brought along, all medics as well. One was a guy and one was girl, who was their supervisor and would be mine, too.
They hustled me and my baggage outside to the line of taxi's and haggled with the driver over the fare price, then when they agreed, we got in and drove off.
They explained to me haggling over the price of anything was customary and expected---one never just paid the price asked for.
So that was new.
Then they took me to lunch at a restaurant located under some bridge. Looking at pictures, it might've been the Galata bridge, since that's the only one with restaurants under it. It was also 1978 and much has changed since then. I remember the restaurant floor felt like it moved slightly to the ebb of the water under my feet.
My new co-workers ordered food for us----in Turkish. They had picked up the language well. (It's actually easy to learn)
What I got was a cooked whole fish on a plate, a bottle of warm Coke and lots of fresh bread. "Ekmek," they told me the bread was called.
The fish lay staring up at me on the plate with it's dead eye while they explained that I was not to drink the water, not even as ice in order to avoid digestive issues.
I picked the fish meat off the bones, loved the bread and sipped the Coke, since I'm not a fan of pop.

Then they took me down to the Ferry that would carry us across the Bosphorus channel to the either side, because it's port was within an easy taxi-ride of the Air Force base. 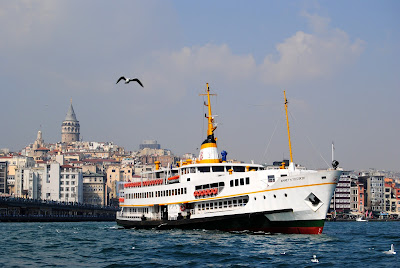 The photo here is of a picture of a modern Bosphorus Ferry, but in 1978, the Ferry we got on was your classic car-carrying type with that wide open, flat back end for vehicles.
My new coworker-friends guided me to the seating area on the upper deck. It was a mix of chairs and small wood tables, where we could order tea from a server and enjoy the breeze blowing in over the rails.
We sat at a table and they ordered a round of "Chai," fot us, which is strong Turkish tea served in little bell-shaped glasses with two big cubes of sugar on the side. Their might've been more bread.

The trip took a couple hours and my new friends used the time to give me a cultural briefing on what should and should not be said or done and taught me some basic Turkish expressions, like yes, no, hello, thank you and good-bye. The good-bye one was interesting because the custom involved using 2 phrases. One was said first, then the second was said in reply.

Once we landed on the other side, there was another taxi ride they haggled fare for and the taxi dropped us off at base's front gate.
It was late in the day by then and they took me someplace where I could sleep. It might've been my dorm room, though I don't remember exactly. I know I exhausted and needed a shower, since I'd been up and in the same clothes for more then 48 hours.
And that's how arrived at my new assignment: by boat.

****
That base was turned back over to the Turks later in 1978 and I was relocated to Incirlik AFB, further south, but while I was at Karamursel, taking that Ferry back and forth to Istanbul was regular thing. Being it was the late 70's, horse-drawn vehicles could still be seen on the streets of Istanbul and a majority of the taxi's were still classic 1950's Chevy's.

John Holton said…
That's about all you can do with a whole fish like that: separate the meat from the skeleton and try not to swallow any bones. It's a challenge the first couple of times...
Jul 16, 2019, 2:16:00 PM