- November 21, 2016
On Fridays, on our way back from the Fitness Center, Hubby and I usually stop at Chick-Fil-A for a to-go lunch, since it's right on the way home. He usually parks the car and goes inside to order our take-out while I wait. (He feels this is faster then the drive-thru, since it's nearly always bumper-to-bumper at lunch hour.) 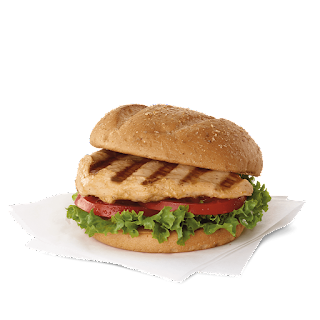 Normally our order consists of one combo Grilled Chicken Sandwich with one iced tea and plus another Grilled Chicken Sandwich. (photo) Though, we get ours plain, without the lettuce & tomato. (Hubby doesn't like it and leaving it off makes the meal cheaper.)
So, it's just a couple plain grilled chicky's on a multi-grain bun that we take home.
For this story, it's important you get that picture. Plain chicken. No cheese. No lettuce or tomato.
We order this because Hubby's doesn't prefer fried crust and, for me, it's the lowest calorie sandwich option.
Once home, I always fix my sandwich up with Vlasic spicy-sweet pickles & Heinz 57 Sauce, so it's less boring.

Then, a couple weeks ago, a hilarious thing happened.
We brought the bag of food home as always, spread it out on the table was we usually do, then opened our sandwich boxes and stared down at what was inside at something...unexpected.
I had some kind of fried chicken breast covered with melted cheddar resting on lettuce & tomato on a bun.
They'd given us the wrong bag!
It was someone else's to-go order--but inconceivably, it had been a nearly identical order in the fact it had been a combo plus an extra sandwich with just one iced tea! Only the actual sandwiches were different.
Chick-Fil-A had never made a mistake before---so we never even thought to check what was in the bag. The sandwich boxes are always buried under the box of fries anyway. We just took it home, like normal. check We never even thought to look in the bag! 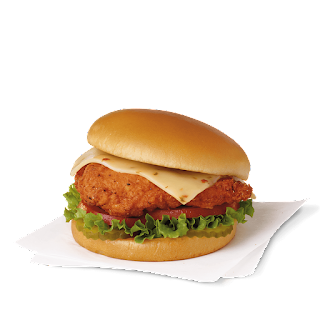 So, now here I was---staring down at golden fried, cheese-covered deliciousness.
I exclaimed, " "I'M EATING THIS!"
Hubby's sandwich had a slice of Pepper Jack.
He said, "Wait. You like this cheese. Let's trade."
Well, I LOVE Pepper Jack, so I delightedly traded, then happily chomped into it.
We had no idea what sort of sandwich we'd gotten, but we quickly discovered this was a SPICY CHICKEN sandwich. I mean tongue-burning, lip-tingling spicy.
"This is so yummy," I burbled, enjoying every succulent bite, since I like spicy.
Meanwhile, Hubby was breathing fire. He doesn't mind a little bit warmth in foods, but he isn't especially fond of his tongue-burning hot stuff.
He kept making these exaggerated rasping-breathing sounds between bites to be funny, illustrating how hot he thought the sandwich was, throwing me and himself into convulsions of laughter.
I quick ran to the frig got a bottle of Ranch Dressing to put on his sandwich and a glass of milk to cool it down.
"This might help," I giggled.
He laughingly slathered his sandwich with Ranch dressing.
We had a severe case of the giggles.
"But you eat like Kimchi," I reminded him, giggling.
Of course, I stopped buying his protests about "spicy" years ago after seeing him devour piles of  radish-cube type Kimchi, which is THICK with red pepper!
"That's different," he laughed.
"I think it's only different for you here," I snickered, pointing at my at my forehead, then pointed to my mouth. "Not here."
Then I said, "I sure wish we could've see those other people's faces when they opened their bag and found little bare grilled chicken sandwiches!"
The mental picture practically made us laugh ourselves right out of our chairs!

****
Epilogue:  Since then I have, on purpose, occasionally ordered a  Chick-Fil-A Spicy Deluxe's as a special treat. Hubby still prefers the naked grilled chicky sandwich. To each his own.